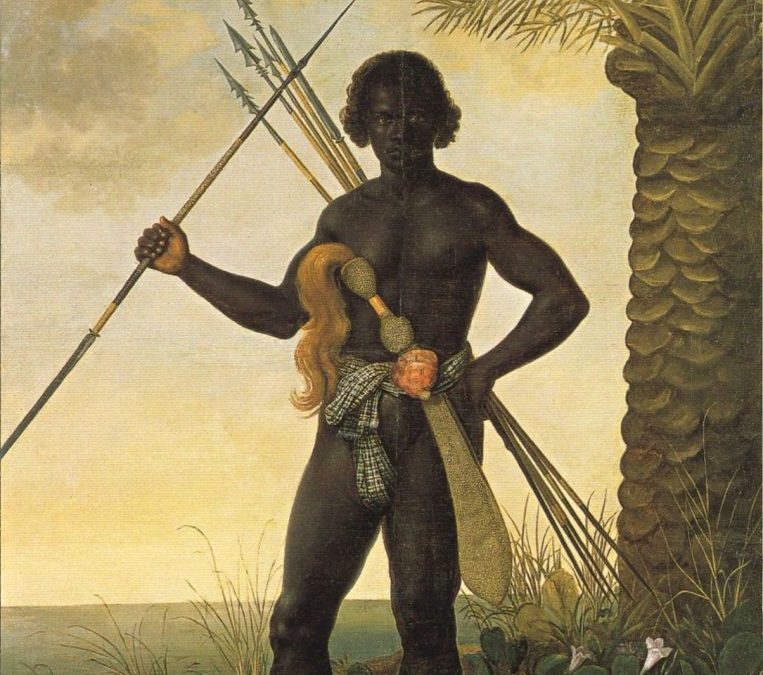 “Ana, cariná rote, aunicon paparoto mantoro itoto manto!” These words are the ancestral war cry that echoed in the ears of Europeans when they encountered Carib warriors in battle. This would have occurred frequently during their brutal conquest and colonization of the Americas in the 17th and 18th centuries. Roughly translated this battle cry means “Only we are people, there are no cowards here, nobody gives up, this land is ours!”

These words without a doubt embody the defiance and noble resistance of the Carib peoples to European hegemony. They underscore that the Caribs, like other indigenous tribes the world over, were not afraid to vehemently defend their lands to the death. The Black Caribs of Hiroona (St. Vincent), in particular, exemplified this contumacy in their struggle against the British in the Second Carib War. A fight for which they paid the ultimate price after losing – deportation and exile from their beloved homeland.

In spite of this tragic end to the conflict, the Black Caribs’ dauntless opposition to the strongest military power of the time, Great Britain, is noteworthy. Indeed, on at least three occasions the British narrowly escaped defeat at Kingstown, the capital city of St. Vincent (a British stronghold). This is a remarkable feat given the large disparity in military resources at the disposal of the opposing sides. Admittedly, the French did serve as advisors to the Black Caribs and supplied them with armaments, which slightly compensated for this imbalance. However, the bulk of the fighting as well as the strategic planning and execution of the war was spearheaded by the Black Caribs.

The Black Caribs were not cowards. Nor did they give up. The fought to preserve their lands to the bitter end – until they were starving and running out of ammunition. Ana, cariná rote, aunicon paparoto, mantoro itoto manto! I am proud to incorporate this potent war cry into Children of the Ocean God, my upcoming historical fiction novel. It adds for me another layer of authenticity and meaning to the story that I tell. In my mind’s eye I can vividly picture a shiver going down the spine of a British militiaman and his face turning pale with fear upon hearing these words – Ana, cariná rote, aunicon paparoto, mantoro itoto manto! A war cry screamed by a gallant Black Carib warrior careening towards him wielding a boutou (an ornamented wooden club) in one hand and a spear in the other, ready to extirpate him from the face of the Earth!

Till next time, thank you for stopping by.

What do you feel when you read the Carib ancestral war cry? Does anything come to mind? I am curious to hear what emotions these words evoke within you. Please feel free leave a comment below.