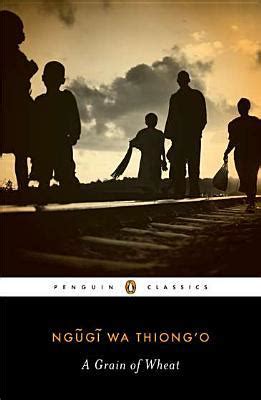 The best way I can sum up A Grain of Wheat, by Ngũgĩ wa Thiong’o, is that it captures the essence of Kenya. Having visted the country on several occasions over the past decade I found the description of the landscape, customs and behavior of the cast of charcters in the novel very familiar. With that said, I am nevertheless unacquainted with the history of Kenya in the run up to it’s independence from Britain in 1963. The names Mau Mau, Jomo Kenyatta and Uhuru are recognizable without actually knowing the backstory. A Grain of Wheat is an insightful, unadorned portrait of the turbulent period in Kenya’s past in the run up to the end of colonial rule. The violence, brutality and arrogant superiority of the British colonists is contrasted starkly against the two types of Kenyans that existed back then. The dogged, passionate, and unyielding freedom fighters who fought bravely and died for Kenya’s freedom and the pragmatic, self-interested and survival-oriented collaborators who were used by the British in their oppression of the former. In many ways the main character, Mugo, pardoxically represents both of sides of the coin. He is revered by many for his unwavering resilence against cruel torture during years of captivity in British concentration camps, yet he harbors a tragic secret that undermines his near heroic status as a freedom fighter. Ngũgĩ weaves an intricate web of characters around Mugo, who to varying degrees are all connected to him at different points of his life, including during the tumultuous Mau Mau uprising. Although, I was not overly impressed with Ngũgĩ’s style of writing, which I found rather pragmatic and unflowery, he is undoubtedly a very effective storyteller. He tells several stories within the main narrative, that enrich the tale. Perhaps my only minor gripe with A Grain of Wheat is that it was quite hard to keep track of the myriad charcaters. At some point it was a bit confusing who was who. This made it hard for me to fully become engrossed in the story, especially at the start. Nevertheless, I would highly recommend A Grain of Wheat to any reader looking to expand their literary horizons by delving into African literature.

Have you read A Grain of Wheat or another of Ngũgĩ wa Thiong’o novels and essays? What do you enjoy most about his writing? Please feel free to share your thoughts in a comment below. Thanks as always for visiting my blog! Also, if you would like to receive more updates about my writing please consider joining my newsletter mailing list by subscribing below.