Book Review: Berlin: Portrait of a City Through the Centuries by Rory MacLean 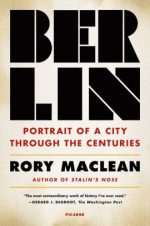 Berlin: Portrait of a City Through the Centuries is an enthralling narrative historical novel which will leave you yearning to discover more about the German capital. MacLean skillfully and colorfully takes readers on a enchanting journey from the end of the Medieval Period right up to the present day with each personal story adding layer upon layer of the fascinating yet tragically brutal history of Berlin. From Frederick the Great to the Second World War and later the Cold War, Berlin is haunted by an unmistakably dark and violent past, which despite the city’s repeated rebirth still is intricately woven into it’s very fabric. For me this novel captures the very essence of what Berlin is, echoing poignantly the words of writer, Karl Scheffler – “It is a placed doomed to forever become, never to be.” It is a place where the tectonic forces of convention and rebellion have repeatedly collided leaving behind both dreadful destruction and wonderful creation. Berlin: Portrait of a City Through the Centuries has elevated my love for Berlin to new heights. Perhaps it will also peak your interest in this amazing city!