Book Review: Down and Out in Paris and London (George Orwell) 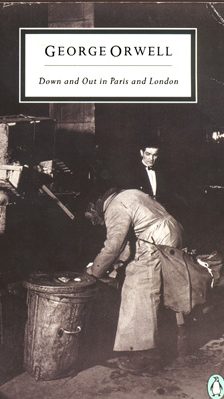 “It is a feeling of relief, almost of pleasure, at knowing yourself at last genuinely down and out. You have talked so often of going to the dogs – and well, here are the dogs, and you have reached them, and you can stand it. It takes off a lot of anxiety.”

This is a fascinating fictional account of poverty and survival on the fringes of society in two European capitals of prosperity, Paris and London, during the Depression era of the early 1930’s.  Written in the style of a memoir, George Orwell takes readers down the rabbit hole of living constantly on the edge of being down to one’s last centime. Starting in Paris, where readers find him eking out an uncertain existence living on a few francs per day, under continual threat of being evicted from his squalid, verminous lodgings and often foregoing meals for days on end. The depression and hopelessness of his situation is palpable as he pawns his last possessions and desperately seeks work, day after day, abetted by his conniving, equally impoverished, Russian friend, Boris, with no reasonable prospects in sight. Even after his fortunes change and he finds employment as a lowly ‘plongeur’ (i.e., a busboy) in a hotel, his existence remains tenuous. Orwell finds himself a slave to his mind-numbing job and hardly better off than when he was on the breadline. Later, after a string of small misfortunes he decides to leave Paris to pursue a job prospect in London, arranged with the help of a friend. Yet in London, his situation hardly improves as his promised work opportunity fails to materialize immediately. Orwell then turns to a life of vagrancy as he bides his time for his fortunes to change once more. This leads to a series of demoralizing experiences tramping around London from one workhouse (i.e., a free lodging house) to the next. During this time he makes the acquaintance of several colorful street characters who teach him important life lessons. Overall, Down and Out in Paris and London is a gripping, brutally honest and authentic account of poverty and survival in 1930’s Europe. My main critique of the novel has to do with its occasional racist viewpoint towards Jews and Blacks, which I found at time off-putting. Admittedly, Orwell was writing in a different time when such slurs were socially accepted and pervasive. Yet I can imagine that this might be offensive to some readers and perhaps is good to know before choosing to read this novel.

Have you read Down and Out in Paris and London or any other of George Orwell’s novels and essays? Perhaps 1984 or Animal Farm? What did you find most interesting and enjoyable? Please feel free to share your thoughts in a comment below. Thanks for stopping by!