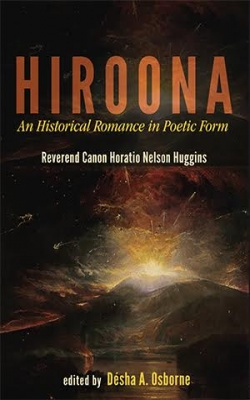 I found Hiroona: An Historical Romance in Poetic Form to be an intriguing and unusual read. The peculiarity of Hiroona lies in the fact that it is written in a narrative poem form which is seldom seen in contemporary literature. Huggins uses this literary style to deliver a romanticized, fictional, historical account of the 2nd Carib War between the Black Caribs (now known as the Garifuna) and the British on the island of St. Vincent (Hiroona) from 1795-1797. I found the first few cantos of the poem to be quite slow and less engaging, however, from the third canto onward the poem hit it’s stride. Huggins’ account of the see-saw war between the Caribs and the British is indeed most gripping when he describes the details of strategies and tactics utilized by the opposing sides in the conflict as well as through his insightful description of the geography of the island which helps one to appreciate many challenges faced by the combatants. What I found less interesting and believable was his account of the fictional Pocahontas-like romance between a black Carib maiden and white colonist cum British militia commander. In addition, the occasional colonial racist overtones as well as negative stereotypes of the Black Caribs as savages detracted from the narrative. This is exemplified, for instance, through his perpetuation of the false myth that the Black Caribs were flesh eating cannibals. Admittedly, this portrayal of the Black Caribs is likely a direct reflection of the dominant eurocentric way of thinking back in the late 1800s, when Huggins wrote Hiroona. However, it contrasts sharply with his frequent admiration and respect for the fighting prowess, sense of honor and resourcefulness of the Black Caribs in battle. There is also an unmistakable regretful moral tone coursing through the poem as Huggins mourns the loss and displacement of the Black Caribs from their beloved homeland Hiroona. I have given this book 3 stars due to the aforementioned drawbacks, however, I would still highly recommend it to anyone interested in pre-1800s Caribbean history. It is also an essential read for students of the French revolution’s profound impact on uprisings against European colonization throughout the Caribbean from 1795 until the independence of Haiti in 1804. Thus Hiroona makes a valuable contribution to the existing rich body of literature such as the Black Jacobins, They Called us Brigands and Winds of Fedon, among others.