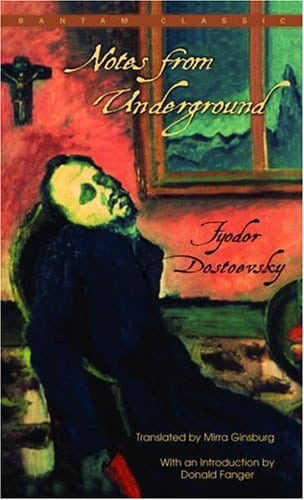 Notes from Underground was my first taste of Dostoyevsky‘s work. Dostoyevsky came highly recommended to me by a good friend, as one of the most critically acclaimed Russian writers of the 19th century not named Leo Tolstoy. I enjoyed Notes from Underground immensely as both a writer and avid reader. I found it mesmerizing in many parts, due to Dostoyevsky’s masterful skill in transporting readers into the darkest crevices of the human psyche. The neuroticism and irrational thoughts of the protagonist are described in faultless, brutal detail, which are at times repulsive, but equally relatable. His periodic comments and rationalizations directed at the reader help to slowly draw the reader deeper and deeper into the story, until one becomes a sort of active spectator in the story – almost as if one is witnessing the events transpire right before your eyes. Nevertheless, I must admit I did not like all aspects of Notes from Underground. I found the beginning incoherent, meandering and amorphous at times. It was therefore initially a challenge for me to get into the first part of the book, while the second part of the book flowed more smoothly due to it’s clearer plot. Perhaps my opinion can be attributed to the fact that I am new to Dostoyevsky and need sometime to get used to his style. In spite of this Notes From Underground offered many gems which I will not soon forget. For me the most beautiful line in this novella was “I want to live to fulfill my whole capacity for living.” Ironically, it is one of the few purely positive lines in the book. Yet for me it illustrates how Dostoyevsky eloquently captures the essence of the aspiration of human existence. In summary Notes From Underground is a complex, masterfully written novella that is worth the effort to read.

Have you read Notes From Underground? What do you think about it? Or have you read any of Dostoyevsky‘s other books? Which one was your favorite and why? Please feel free to share your thoughts in a comment below.