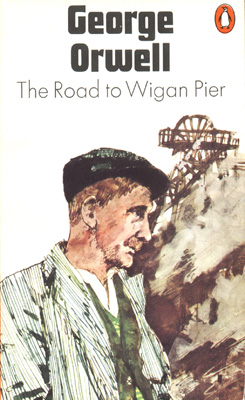 I found Road to Wigan Pier quite a difficult book to read. I started and stopped several times, but in the end managed to persevere to the finish. Although George Orwell is a widely acclaimed fiction author, this particular non-fiction work from him felt bland and wearisome. It was almost as if he was recounting information in a government census bureau report. The lives of the English proletariat eking out an existence in the abject conditions of Northern England, surely could have been presented in a more entertaining or at least captivating manner. Instead Road to Wigan Pier consists of more or less drab musings about the poor, which eventually degenerate tangentially into an opinionated political rant about Socialists and Communists. The latter being perhaps the most interesting aspect of the book. So overall I wouldn’t recommend Road to Wigan Pier unless you’re an absolute diehard Orwell fan. I would rather suggest you to read Down and Out in Paris and London. It is vastly more engrossing, while still providing a social commentary on poverty and vagrancy.

Have you read Road to Wigan Pier or another of Orwell’s books or essays? How did it compare to his other more renowned works such as Animal Farm and 1984? Please feel free to share your thoughts in a comment below. Thanks for visiting my blog!