Behind the Scenes Children of the Ocean God: Carib (Kalinago) Place Names 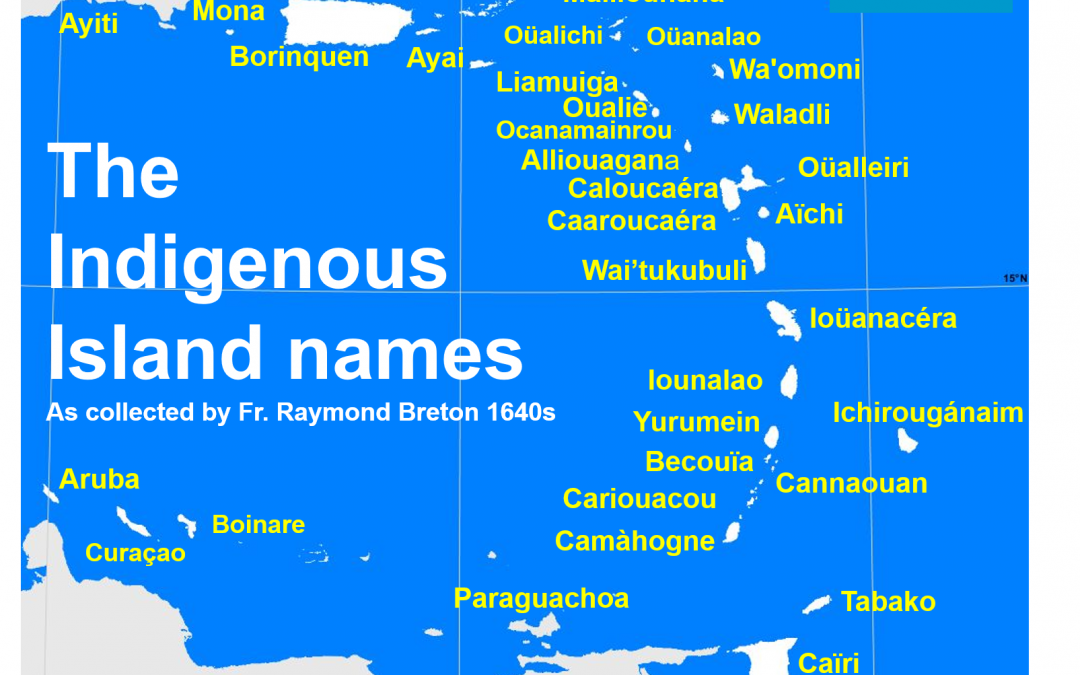 This week I would like to give you another behind the scenes sneak peek into my upcoming historical fiction novel, Children of the Ocean God. This time I would like to focus on the Carib (i.e., Kalinago) language, which was spoken by my ancestors, the Black Caribs. Their conflict with the British during the Second Carib War, is the subject of Children of the Ocean God. As I mentioned in a previous blogpost the Garifuna language (which essentially is an offshoot of the Cariban language) is fascinating since it has evolved significantly over time, with a dramatic shift in its linguistic make-up taking place in the last 220+ years. Most notable has been the dramatic change in composition of Arawak and Carib words used. However, today I will not delve into that topic and encourage you to read my earlier post if you are interested in knowing more on that subject.

Equally interesting in its own right, from a linguistic perspective, are the names and meanings that the (Black) Caribs gave to the various islands in the Caribbean archipelago (which are mentioned in the narrative of Children of the Ocean God). In the table below I have summarized the names and their (reputed) meanings, which reflect in many ways how the (Black) Caribs conceptualized the world around them. For reference I have also included the modern names for each island. Like other indigenous peoples, these place names typically describe specific geographical and ecological features of the islands that would have been useful for navigational and survival purposes. For instance, Wai’tukubuli means “Tall is her body,” which indicates that Dominica has a distinctly mountainous interior. This would have been handy as a navigational aid to distinguish it from other land masses in the island chain. Similarly, Hewanorra and Jouanacaeira both mean “Land of iguana,” which were a food source for the Caribs. Thus these names suggest that these were islands where iguana were abundantly available. The similar meaning yet different spelling of the names of the two islands may be reflective of the different species of iguana found on each island. Guadeloupe (Jouanacaeira) is renowned for its green iguanas, while St. Lucia (Hewanorra) is known for the eponymous St Lucia iguana which are greyish/green in color and have distinct black stripes.

Notable exceptions to this naming convention are Hiroona and Camerhogne, which both do not convey geographical or ecological information, but rather have a seemingly more spiritual/sacred meaning. However, upon further investigation I am somewhat skeptical of their reputed meanings in the Carib (i.e., Kalinago) language. The historical record reveals that when Columbus first spotted Camerhogne (Grenada) he gave it the name La Concepción in honor of the Virgin Mary. This likely suggests that it was not the original meaning that the (Black) Caribs would have intended. The same may also apply to Hiroona (St. Vincent). It is therefore quite possible that the original meanings in Carib (i.e., Kalinago) have sadly been lost over time. This is yet another mini mystery that remains to be solved!

I hope you found this post enlightening and thoughtprovoking! As always thanks for stopping by! Please feel free to leave a comment below if this post has triggered you. Also, if you would like to receive more updates about my writing please consider joining my newsletter mailing list by subscribing below.