Behind the Scenes Children of the Ocean God: Carib Petroglyphs 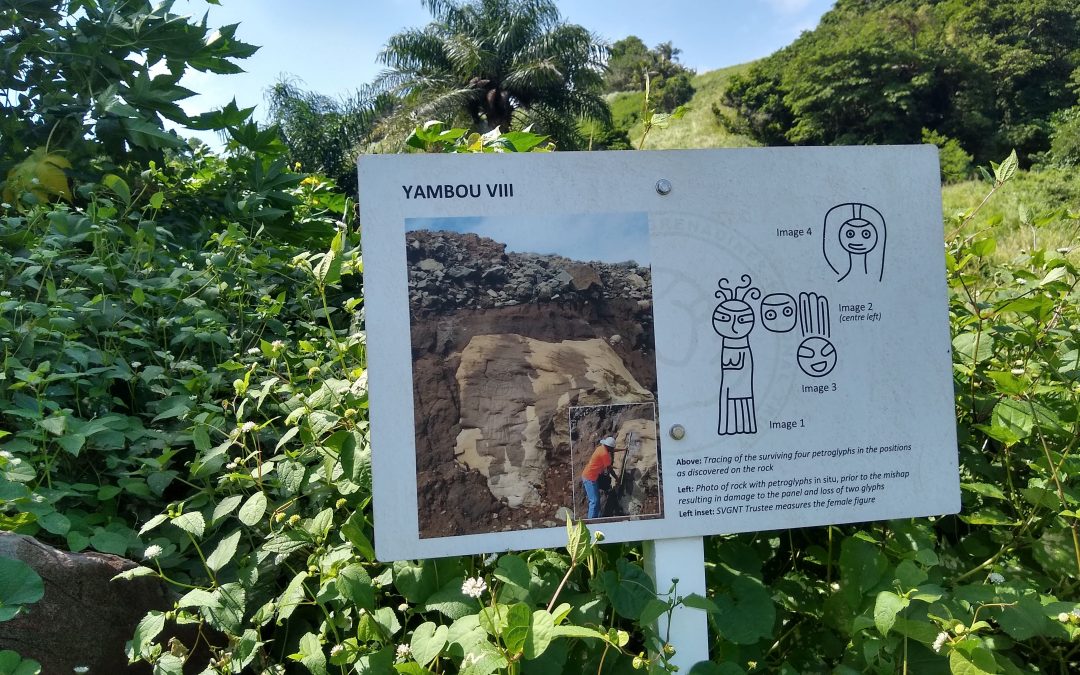 In today’s blog I want to share more about a very interesting and less well known aspect of Carib (i.e., Kalinago) culture and history. The Caribs recorded seminal events and noteworthy aspects of their lives through drawings that they carved/cut into rocks and cave walls, called petroglyphs. It is important to note that petroglyphs are distinct from heiroglyphs, since they are not symbols used to represent words. They are rather cultural images, which often have a deep religious and spiritual significance, with the meaning derived from the context of the image or series of images. In other words, petroglyphs are not simply rock art nor are they ancient graffiti!

In St. Vincent, there are several sites that have have been discovered with relatively well preserved examples of Carib petroglyphs. Among the most well known is the Yambou Site (aka Argyle Petroglyph Park) on the windward coast. During my recent trip to the island I had the privilege to visit this site and see many of the petroglyphs in real life. The petroglyphs were quite impressive, since they were scattered over a wide terrain, and were carved into rocks of a myriad of shapes and sizes. Many of the images and their corresponding contexts were quite complex and therefore difficult to interpret and understand from a modern perspective. What was clear to me is that there was an definite intent behind the making of the pertroglyphs and it must have taken quite some time for skilled Carib artisans to meticuously carve these images into the rocks. I was also left wondering if the rocks were themselves carefully (re)positioned and oriented, for a specific religious or cultural purpose. Given the size and weight of these boulders (some of them on the order of several metric tons), one can only imagine how the Caribs would have accomplished this hundreds of years before the advent of modern heavy-lifting technology.

I also encountered several petroglyphs during my visit to the St. Vincent National Trust Museum in Kingstown. These specimens were obviously removed from their original sites by archaelogists in the past and are now on public display. Interestingly, despite being generally better preserved than the open air petroglyphs, I still found it quite challenging to make sense of these petroglyhs (see image below). It is very hard to grasp their meaning, beyond a few images, which are repeated (note – the similarity of the petroglyphs in the bottom and top pictures of this post). For instance, so far as I can tell some of the faces depicted in the petroglyphs seem to represent ‘people’ with hands, while others seem to represent ‘gods’ or possibly ‘animals.’ It is easy for one to imagine that the ‘animals’ could be a monkey or even an iguana with a tail. Luckily there are archaeologists and historians working hard to decipher the petroglyphs so that we can better understand the important messages they contain. I am eagerly looking forward to fnding out more about the meanings of the petroglyphs in the future!

I hope you found this week’s blogpost interesting. As always thanks for stopping by! Please feel free to leave a comment below if you would like to share your thoughts. Also, if you would like to receive more updates about my writing please consider joining my newsletter mailing list by subscribing below.