Behind the Scenes: Children of the Ocean God – Chronology 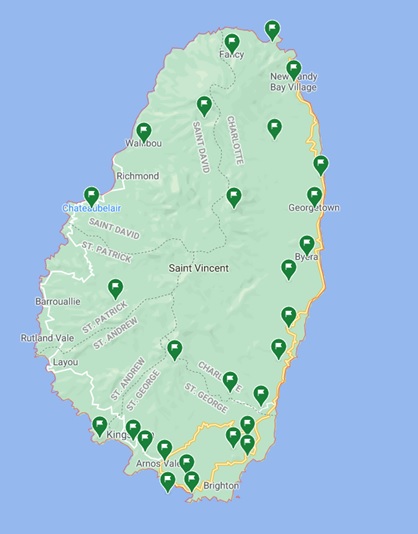 I have some good news to report! This month, I have finally started writing the first chapter of my historical fiction novel, Children of the Ocean God. This story will chronicle the up and down saga of the Second Carib War, which was contested between the Black Caribs (Garifuna), French and the British on the island of Hiroona (now called St. Vincent), from March 1795 to March 1797.

What attracted me most to recount this tale, apart from the fact that the Black Caribs are my ancestors, is that it is a compelling story about the courageous yet futile resistance of an indigenous people against a mighty colonial superpower – Great Britain. Tragically the war ended not only in their defeat, but also in the genocidal deportation of almost the entire Black Carib population from their beloved homeland – Hiroona.

Equally sad, as my research has uncovered, is that many of the historical records about the Black Caribs are incomplete, inconsistent or unreliable in one way or another. For instance, as a result of British colonization, many of the original indigenous place names in St. Vincent (such as Tarratee and Conarie), that are referenced in various historical accounts, can no longer be found on present-day maps of the island. Making matters worse, sloppy historical recordkeeping in the past also means that dates and names are sometimes confused in different records. For instance, the arrival of Lieutenant General Ralph Abercrombie in St. Vincent is reported as being on June 3rd, 1797 or alternatively four days later on June 7th, in differing accounts.

Another, historical peculiarity is that, with the exception of paramount chief Joseph Chatoyer, only the first names of key Black Carib chiefs who fought in the war, such as Codron, Duvallé and Joyette, are recorded, with little or no accompanying biographical information. In contrast, the full names and biographical details of key European figures in the war, such as Major Alexander Leith and Governor James Seton are all well documented. Worse still, is the fact that many of the widely disseminated accounts of the Black Caribs, by French priest Adrien Le Breton and British nobleman Sir William Young, are one-sided and patently racist. Indeed the Black Caribs are invariably, incorrectly depicted as violent savages and cannibals; largely to advance European colonial interests, i.e., to justify the seizure of their lands and ultimately their extirpation.

As a result piecing together a coherent, reliable story, from the perspective of the Black Caribs, about the Second Carib War has been a challenge to say the least. Thankfully, among the most useful resources that I have laid my hands on thus far have been Reverend Horatio Nelson Huggins’ Hiroona: An Historical Romance in Poetic Form and Christopher Taylor’s The Black Carib Wars: Freedom, Survival, and the Making of the Garifuna. Despite, their imperfections both of these books have allowed me to carefully construct a historical lattice work on which I am now able to develop Children of the Ocean God.

Below is a short chronology of the historical events surrounding the Second Carib War, on which my fictional story will be based.

1795/Mar14 Chatoyer takes down the British flag, replacing it with the French Tricolor

1796/Jun10      Black Caribs surrender to the British. Negotiation of terms is drawn out over next 9 months

1796/July          Exile to Baliceaux island off Bequia. Captives spend nearly 9 months there and many die

Let me know what you think about this in the comments below. Thanks!