Behind the Scenes Children of the Ocean God: Historical Sites of Interest in Hiroona (St. Vincent) 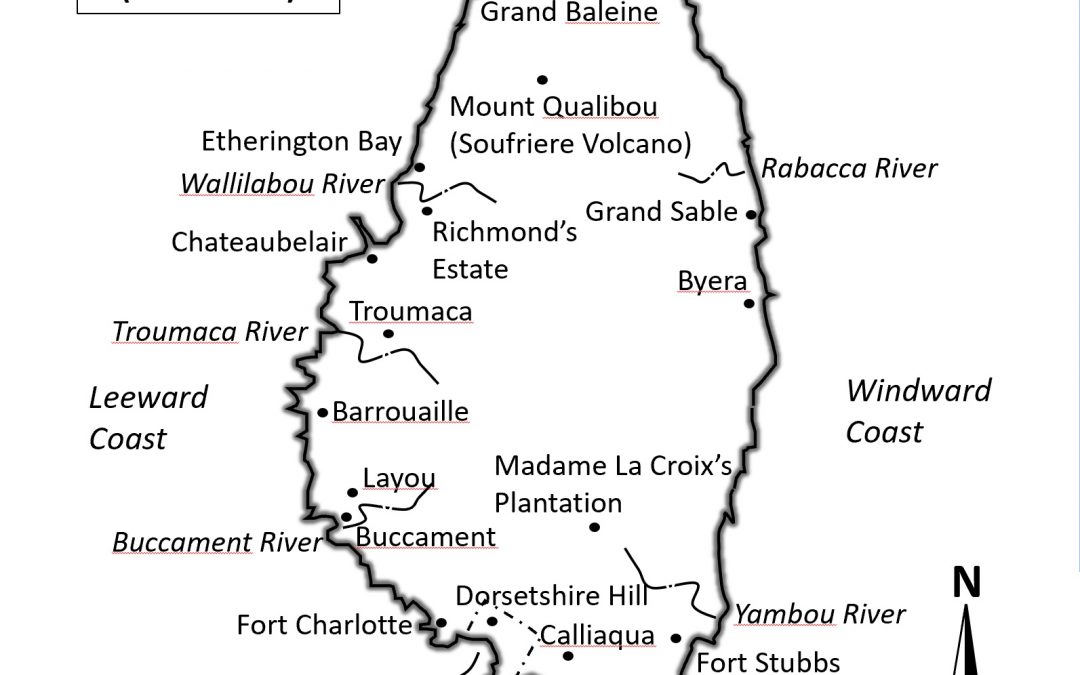 This week’s post is a little bit different from some of my past blogs. Today I want to share more about the historically important sites on the island of St. Vincent, which are significant to the Second Carib War. As you may know this conflict the subject of my upcoming historical fiction novel, Children of the Ocean God, which I am eagerly looking forward to release in 2023. I have in fact recently created a customized map (which I am previewing in the feature image of this blogpost) highlighting all of the key places that are mentioned in the narrative of my book, to give readers a spatial sense of the theatre of action of the war, which was contested from 1795 to 1796, between Great Britain and the allied forces of the French and Black Caribs (referred to in the present day as Garifuna).

Despite St. Vincent being a tiny island (with an area of just 435 sq. km) it’s rugged, mountainous and unforgiving terrain makes it geographically quiet a challenging arena for conducting warfare. Interestingly, the action of the war was spread at various points in time during the war over the length and breadth of the island, from as far north as Owia to Calliaqua in the south. However, the majority of intense fighting in the conflict was centered in an around Kingstown (the capital), with the most seminal battle taking place at Dorsetshire Hill. In the wee hours of the night on March 14th 1795, the battle for Dorsetshire Hill unfolded, which resulted in the death of Black Carib Paramount Chief Joseph Chatoyé (the first national hero of St. Vincent), along with a score of other French and Black Carib fighters. Located, a mere 2 km from the British stronghold of Fort Charlotte (incidentally named after Charlotte of Mecklenburg-Strelitz, the wife of King George III), Dorsetshire Hill is a place of infamy for Black Caribs.

Another site of significance in the war is Chateaubelair. At the time it was the northernmost settled town on the island, and was the place where Chief Chatoyé’s issued his renowned ‘Cry of Liberty‘ declaration. This declaration was a rallying cry for French settlers on the island to join the struggle againt the British. Equally important is the plantation of Madame La Croix which was burned to the ground by the Black Caribs on the night of March 8th 1795, signalling the start of the Second Carib War.

It is also worth noting that many place names in present day St. Vincent such as Calliaqua, Byera, Layou, Troumaca, and Yambou are of Carib origin. In fact, they would have been widely used and recognized in the late 18th century by the Black Caribs, British and French alike. Lastly, it would be remiss of me not to mention the original indigenous Carib names for St. Vincent (Hiroona or sometimes alternatively spelled Hairouna – meaning land ofthe blessed) and the neighboring island of St. Lucia (Hewanorra – meaning Land of the iguana) and Grenada (Camerhogne – meaning Conception island). These would have been the actual names used by the Black Caribs to refer to these islands back in 1795. Fascinating isn’t it? Piecing together places and historical events during the Second Carib War has been instrumental for me to gain a deeper understanding of this conflict and pen a more authentic, rich narrative.

As always thanks for stopping by! Please feel free to leave a comment below if this post has triggered you. Also, if you would like to receive more updates about my writing please consider joining my newsletter mailing list by subscribing below.