Behind the Scenes: Children of the Ocean God – The Cry of Liberty 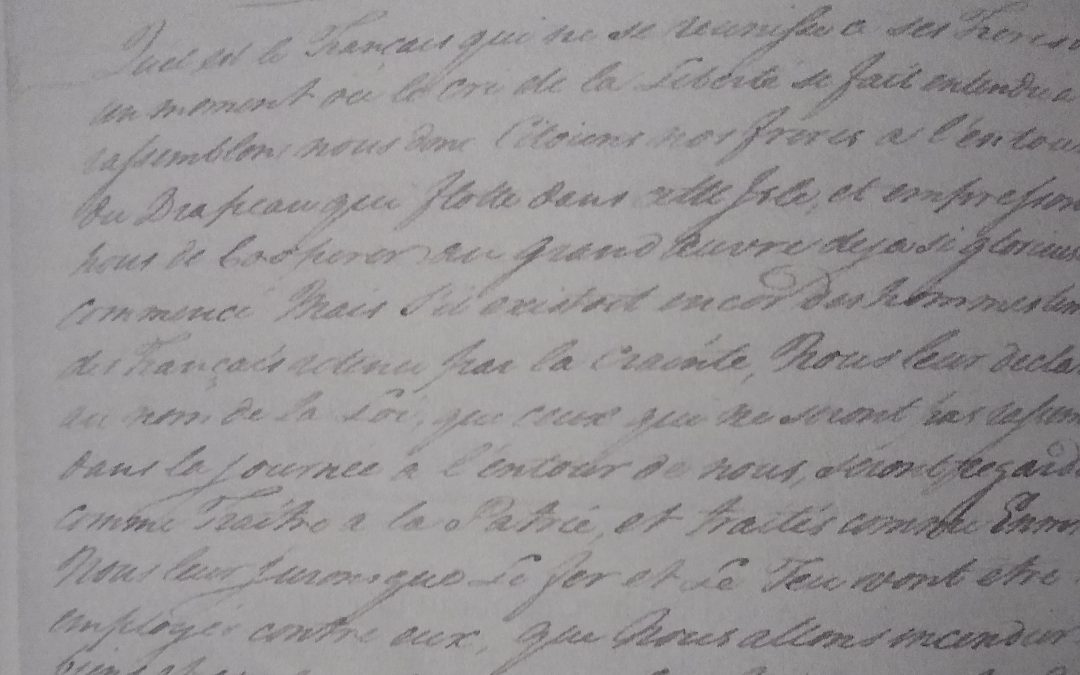 This week is an exciting period for me as a writer since it is the 226th anniversary of the Second Carib War. This conflict, which took place on the tiny Caribbean island of St. Vincent, is the focal point of my upcoming historical fiction novel, Children of the Ocean God. Today I would like to share one of the most seminal moments from the first phase of the war, in which the Black Caribs (Garifuna) were on the offensive against their British adversaries.

Picture this. Within a single day the leeward Black Carib army and their French revolutionary allies, led by Paramount Chief Joseph Chatoyé, had seized Chateaubelair, the northernmost European settlement on the leeward coast of the Colony of St. Vincent. Overnight the Black Caribs were in control of more than half of the island. However, despite this immense success, Chatoyé‘s army did not continue it’s southerly push towards the capital, Kingstown. Instead they paused their lightning assault in Chateaubelair. Why you may ask?

That’s an interesting question that is not so straightforward to answer based on the historical records. However, from what is known it is likely that Chatoyé wisely stayed his attacking army’s hand in order to garner more support from French planters and their slaves, before striking at the British stronghold of Kingstown. However, there was a problem that he encountered that made this not an easy task. You see many of the French planters were not keen to pick sides in the war. They preferred to hedge their bets just in case the war did not turn out in the French’ and Black Caribs’ favor.

So Chatoyé had to find a way to rally the French planters to the Black Carib cause. He did this by brilliantly making a proclamation on March 12th, 1795 in which he channeled the fervor of the French revolution:

*Chateaubelair, 12th March and the first of our freedom

Who is the Frenchman who will not join his brothers at a moment when the cry of liberty is heard by them? Let us then rally citizens and brothers around the flag which flies in the island and hasten to cooperate in the great work already so gloriously begun. But if any timid men should still exist, should any Frenchman be held back through fear, we declare to them in the name of the law that those who are not mustered with us within the day will be regarded as traitors to the country and treated as enemies. We swear to them that fire and the sword will be used against them, that we will burn their goods and that we will slit the throats of their wives and children to wipe out their race.

What is remarkable about this proclamation, which was written by Chatoyé in perfect French, is that it is one of the few examples in the historical record of a document written by a Black Carib. Indeed, it is also for that matter, one of the few writing samples from a free person of African descent during the height of the colonial slave period in the Caribbean. Chatoyé‘s command of the language and passionate plea to the French planters offers a telling glimpse into to his character and mood at the time. The proclamation clearly reveals that he was a tough, no-nonsense leader who despised cowardice and was unafraid to use threats of violence to achieve his objectives. In other words, he was a bad-ass who wasn’t afraid to kick some ass if he had to! Given that the Black Caribs were fighting an existential threat for their freedom and continued right to live on St. Vincent, Chatoyé‘s harsh tone should come as no surprise.

It should be noted that the next day the French planters and their slaves rallied to Chatoyé‘s leadership and the leeward army resumed its drive south!

Note: *This translation into English is from Christopher Taylor’s book The Black Carib Wars: Freedom, Survival, and the Making of the Garifuna. The original French version pf the proclamation can be seen above in the featured image of this blogpost.

What are your thoughts on Chatoyé‘s proclamation at Chateaubelair? Are you keen to learn more about the fascinating history of the Black Caribs by reading Children of the Ocean God? Please feel free to leave a comment below, I would love to hear from you.