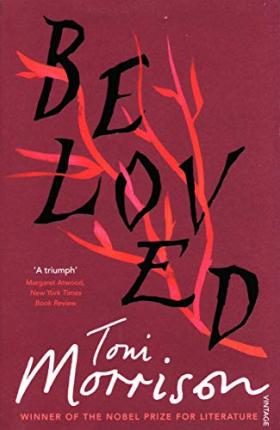 Beloved, by Toni Morrison is a gripping, emotionally charged tale about a black matriarchal family in post-Civil War America, struggling to overcome the deep psychological scars of slavery. The story begins chaotically with a baby ghost mysteriously possessing a house occupied by the main character, Sethe, and her youngest child, an adolescent daughter named Denver. Sethe, a former slave who has runaway to Ohio, from a plantation in Kentucky, called Sweet Home, lives contentedly in this haunted house. Morrison skilfully ensnares the reader in Sethe’s dramatic life story, through a series of graphic reminiscences in which we learn of past traumas in her life ranging from being raped to having her breast milk stolen, as well as witnessing the bodies of lynched black men she knows swaying in trees.

Eventually, Sethe’s darkest secret is revealed. Out of deep maternal love, Sethe, has killed her own baby daughter, by taking a saw to her neck, to prevent her from being re-enslaved, by slave catchers, who had come to recapture, the fugitive Sethe. This sacrificial act leads to Sethe’s arrrest and imprisonment. Although she is eventually acquitted she is ostracized by the Black community in Ohio. Interestingly, this aspect of the story is inspired by the true story of Margaret Garner, an enslaved person in Kentucky, who in 1856 escaped and fled to Ohio, a free state in which slavery was outlawed. She was subject to capture in accordance with the Fugitive Slave Act of 1850. When U.S. marshals burst into the cabin where Garner and her husband had barricaded themselves, she was attempting to kill her children, and had already succeeding in killing her two-year-old daughter, to spare her from being returned to slavery.

One day out of the blue, a peculiar young woman, named Beloved, shows up at Sethe’s doostep. Through a series of bizarre interactions with Beloved, Sethe comes to believe that Beloved is an incarnation of the daughter that she killed. This precipitates feelings of profound remorse and guilt in Sethe. Her life descends into chaos as Beloved slowly drives a wedge between Sethe and everyone to whom she is close, including her daughter Denver and newfound lover, Paul D. In this aspect of the story, the tale woven by Morrison, becomes somewhat convoluted and less believable. Similar confusion surrounds a few other parts of the story such as the acquittal of Seth for murder of her baby daughter and the murky cicrumstances surrounding the disappearance of Halle, the father of Sethe’s children, during their escape from Sweet Home.

Nevertheless, despite a few shortcomings, Beloved, speaks a profound truth about the deep psychological impact that slavery had on formerly enslaved Black people and about the ugly roots of racism in America. Morrison, spares no detail when shining a light on the countless atrocities and indignities that were inflicted by white people upon enslaved African people. In many ways this is summed up by Sethe’s mother-in-law, Baby Suggs, who at one point in the novel, powerfully says, ” There is no bad luck in the world but whitefolks.” The imagery and prose used by Morrison is consistently mellifluous and vivid, forcing the reader to confront many unpleasant truths. Beloved makes a compelling indictment of slavery as being far more sinister and enduring than simply acts of physical cruelty. Even after physical bondage ended Black people were/are still grappling with its deleterious mental aftermath.

Have you read Beloved or any other of Toni Morrison’s books? What are you reflections on her writings? How did they affect you?Please feel free to share your thoughts in a comment below. Thanks for stopping by!