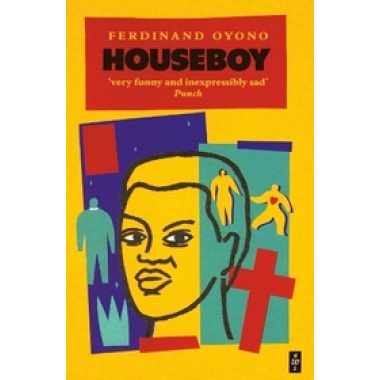 “There are two worlds,…ours is a world of respect and mystery and magic. Their world brings everything into the daylight, even the things that weren’t meant to be…”

The novella, Houseboy, by Ferdinand Oyono is an amusing, sarcastic and ultimately tragic social commentary about European colonosiation of Africa. Through the unassuming yet astute eyes of houseboy, Toundi, we are given a view into the two worlds, one African and the other French, which share an uneasy coexistence in colonial, post-war Cameroon. As a houseboy or domestic servant for a French commandant, Toundi finds himself in a privileged position in which he can observe his European master and mistress in both public as well as private settings. Despite his naivety (ostensibly due to his unsophistication as an African houseboy), which at times leads to awkward yet hilarious situations, Toundi still keenly perceives the hypocrisy and immorality ingrained in European colonial civilization. At the same time he laments the impotence, or perhaps even cowardice, of his African countrymen in standing up to the European hegemony wrought by colonialism. This leads to outward expressions of defiance and resentment which quickly earn Toundi the wrath of his French overlords, leading to his ultimate tragic demise.

Houseboy is written in a very easy to read style which makes it accessible to anyone. What I enjoyed most about this book was how Oyono subtly relates the perspective of Toundi and his African contemporaries through the use of sarcasm and humor. He links their interpretation of the behavior of Europeans seamlessly to the traditional Cameroonian values and customs, in unexpected, creative ways. What I also found fascinating is how the story evolved and unravelled like a ball of twine, growing richer and more elaborate as it progresses until the denouement is finally reached. My only minor quibble with Houseboy is that it feels too short. I was left unsatiated – feeling as if I had read only a fragment of a story, one which could have been even more enthralling. Nevertheless, I highly recommend Houseboy and eagerly look forward to reading more of Oyono’s work in the future.

Have you read Houseboy? What were the highlights and key takeaways of the book for you? Please feel free to share your thoughts in a comment below. Thanks for stopping by.