Book Review: The Soft Vengeance of a Freedom Fighter by Albie Sachs 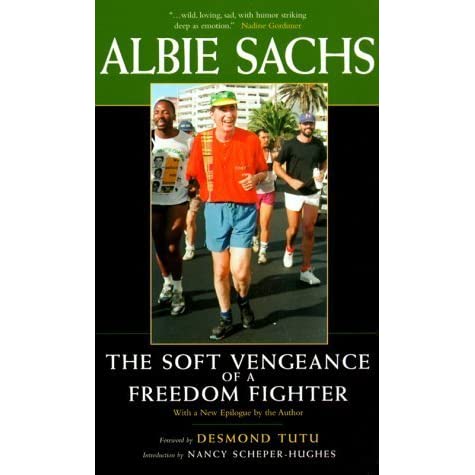 The Soft Vengeance of a Freedom Fighter is an entertaining, playful and touching memoir written by anti-Apartheid struggle hero Albie Sachs. It is a humble, gentle and at times humorous account of Albie’s recovery from an assassination attempt in which his right arm was blown off by a car bomb in Maputo, Mozambique. While I must admit that several of the ‘tactile,’ sensual stories that Albie recounts were at times a bit too intimate for my taste, I did appreciate Sachs’ openness to describe all facets of his recovery. ‘Spectacles…testicles..wallet and watch‘ and all! What most resonated with me in The Soft Vengeance of a Freedom Fighter were the parts in which he described how his body felt after the bomb, as well as the up and down roller-coaster of emotions that he experienced during his long and arduous physical (and mental) rehabilitation. The pain, anger and tears that he shares are all very human and relatable to anyone who has been through a life-threatening trauma. Indeed, Albie’s words are a vivid reminder of my own recovery from a close brush with death more than a decade ago. I admire greatly his perseverance and indomitable spirit which is exemplified in his final jog on the beach in Maputo in which he symbolically finished the run that he was about to embark on moments before the car bomb went off. This book adds to the exceedingly rich body of literature on apartheid and is worth reading since it deepens as well as expands the scope of what it meant to be a ‘freedom fighter’ during the struggle against apartheid.