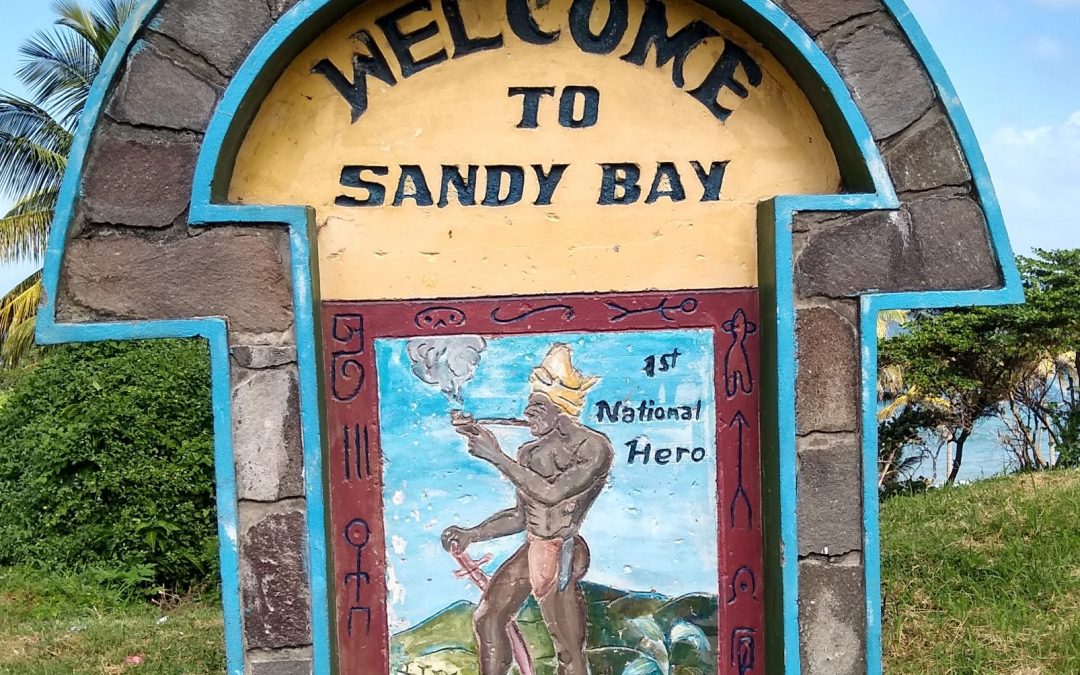 Sorry for the delay in sharing the second part of my recent visit to the island of St. Vincent. As I mentioned in my previous blogpost, I was barely on the ground for twenty-four hours. So it was a whirlwind trip filled with many emotional and spiritual highlights. Among the most memorable places I visited after leaving Dorsetshire Hill, was Fort Charlotte, which is located on the outskirts of Kingstown. Fort Charlotte is a British-colonial era fort, completed in 1806 (nine years after the end of the Second Carib War), situated on Berkshire Hill, which overlooks Kingstown Harbour. It has a breahtaking view of the southern coast of St. Vincent and of the nearby Grenadine island of Bequia. It is one of the key settings for the narrative of upcoming historical fiction novel, Children of the Ocean God.

Fort Charlotte, has obviously changed somewhat in the past two hundred and sixteen years, however, it is still quite well preserved. In the past there were as many as thirty-four guns and some canons mounted around the walls ofthe fort; all directed ominously inland and not towards the sea (due to the threat of attack from the Black Caribs and the French from all directions). Today there are just half a dozen canons remaining, however, the fort left me with a feeling that it was an impressive structure in it’s time (and still is today). (Interesting I never had a dark, ominous, evil feeling like I got when I visited Elmina Slave Castle in Cape Coast, Ghana).

After about thirty minutes traipsing around Fort Charlotte, I went to check into my hotel (the Cobblestone Inn), which brought my first day of exploring St. Vicent to a close. My hotel, is itself a historic building in Kingstown, dating to 1813. However, it is best known as the building in which King Ja Ja, a Nigerian Prince who was exiled to St.Vincent in 1888 once lived. That evening I had dinner and drinks with a respected Vincentian historian, Dr. Adrian Fraser, who has been a tremendous support in sharing helpful historical information and arranging me a dependable, local driver (Mr. Russell) to take me around the island on my first day.

On the second day I was on my own, without my driver Mr. Russell. I decided to use the oppirtunity to explore Kingstown and visit a few sites of interest relevant to Children of the Ocean God. High on my list was St. George’s Cathedral, where Major Alexander Leith, one of the main characters in my book is buried. After asking around at the Cathedral, I discovered that Alexander’s tomb is in fact situated directly beneath a large wooden chandelier, under a reddish carpet. So with a little bit of fanagling I managed to take a partial snapshot of his grave to confirm that he is indeed buried there.

What was most interesting of all about my visit to St. George’s Cathedral was something which I had completely not expected. My father told me the prevous evening that my grandmother, Nellie Dellimore, was buried at the same cathedral as Alexander Leith. He sent me some photos of the grave site and gave me a few crude directions to assist me in finding the tombstone. Although, it was at first quite challenging, I eventually managed to find my grandmother’s grave, which sadly was not in the best condition. I laid a wreath and said a small prayer, which felt as if I was meeting my grandmother for the first time ever. Naturally, this was the emotional apogee of the trip, which I had totally not expected when I first planned to visit St. Vincent.

After St. George’s Cathedral I headed to St. Vincent National Trust Museum, on the suggestion of Dr. Fraser. It contains a relatively modest collection of artefacts, including several related to the Black Caribs. It was an interesting place to visit since it helped to further enrich my knowledge about the Carib petroglyphs. It was also very enlightening to learn about past volcanic eruptions on the island, which caused quite an impressive amount of destruction.

Within an hour I returned to my hotel to collect my bag and take a taxi to the airport. My trip to St. Vincent had flown by in a blink of an eye. Nevertheless, I am looking forward to returning to St. Vincent in the near future once Children of the Ocean God is published. Lastly, as I mentioned in my previous post it is truly impossible to convey in words the fire that this trip to my father’s homeland has ignited within me. It has given me the emotional fuel I needed to push through and finish writing the first draft of Children of the God. Thank you for stopping by! As always please feel free to leave a comment below, or to join my mailing list if you would like to receive updates on the latest news regarding my writing.