Tell Them We Are Rising! 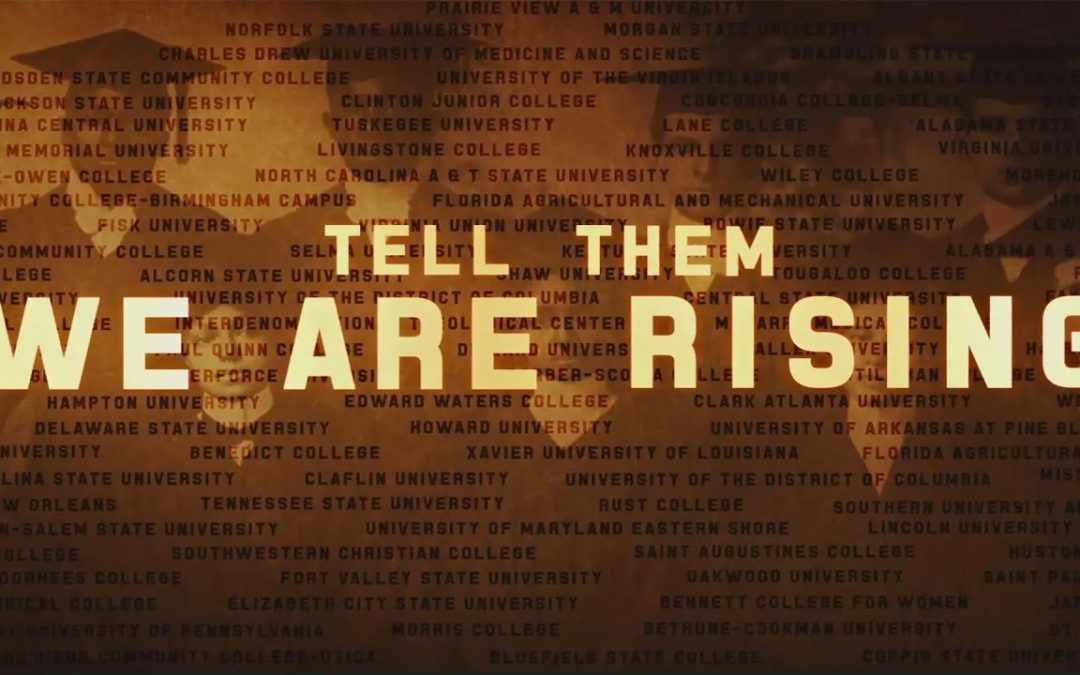 Recently a close friend of mine shared an inspiring documentary film on historically black colleges and universities (HBCUs) entitled Tell Them We Are Rising. It highlights how important these institutions are for Black Americans not only as centers of learning but also as psychologically safe spaces where Black people can be themselves and exert control over their own education. At the same time Tell Them We Are Rising also chronicles how HBCUs have a somewhat conflicted and contradictory origin. In the beginning, they were often helmed by ‘well-meaning’ liberal Whites, who, while trying to uplift the Black masses out of the ignorance imposed by slavery, also frequently infused racist ideologies and stereotypes of Black people into the educational trainings they offered. This manifested itself for instance in the rigid separation of male and female students at many HBCUs, which was often accompanied by very strict regimentation of the lives of students; everything from when to wake up in the morning to when to go to bed at night was strictly controlled. This was done because Black students ostensibly needed more supervision to overcome their inferior intellectual disposition for learning relative to Whites and to inhibit their natural tendency towards promiscuity. Nevertheless, HBCUs have evolved over time to ultimately empower Black people to seize control of their own destiny by training the vast majority of Black professionals in the United States, from doctors and lawyers to scientists and engineers.

As I watched Tell Them We are Rising I was reminded of my own experiences studying at Morehouse College in Atlanta, Georgia. Morehouse is a small, historically black, all-male liberal arts college which is one of the most prestigious HBCUs. It has a long, distinguished legacy of producing black male leaders, and boasts such famous Alumni as Dr. Martin Luther King Jr. and Edwin Moses, to name a few. In fact, I wrote about the impact of Morehouse on my life in my memoir Walking in Footsteps of Promise. In many ways my reflection on my time at Morehouse made me realize the pivotal role that this institution played in my evolution as a man.

Below is a brief excerpt from Walking in Footsteps of Promise (Chapter V – A New Beginning) which talks about what it was like attending Morehouse back in the late 90s:

“I must confess my first glimpse of the Morehouse College campus did not leave me with an overly glowing impression. It appeared rather small and was architecturally unimpressive. In fact, the college grounds did not resemble anything that I had seen in the official Morehouse brochure. The ultra-modern looking red-brick buildings and the dodgy neighborhood surrounding the campus somehow seemed incompatible in my mind with the image that Morehouse had presented as an institution of higher learning with rich tradition and history. The only outstanding structure on campus that caught my attention was the Martin Luther King Jr. International Chapel which sits atop a gently rolling hillock overlooking the Jesse Owens Memorial Stadium near the main entrance to the campus. The larger than life statue of Martin Luther King, Morehouse’s most famous alumnus and only Nobel Laureate, in the foreground of the chapel compellingly reminds visitors of his “dream” and commemorates the vital role that Dr. King played in the civil rights movement.

However, a school is more than a collection of buildings made from bricks and mortar. What Morehouse lacked in architectural splendor it easily made up for in the commitment of its staff and faculty to its students. From day one of freshman (i.e., first year student) orientation there was an unmistakable energy in the air that made me soon realize that Morehouse was no ordinary college. Part of it was the way in which we were constantly reminded that we were destined to be the future black leaders of the world. It was also the emphasis that the faculty placed on the liberal arts education that would mold us into upstanding, well-rounded and educated black men, in stark contrast to the drug dealing, deadbeat, semi-literate stereotype of black males portrayed in the mass media. The intangibles that Morehouse provides its students go far beyond the intellectual and academic offerings of most institutions of higher learning. Morehouse is unique in that in addition to emphasizing scholarliness it also engages its students through a series of ‘rites of passage’ which are geared towards instilling a strong value system and a spirit of fraternity.

An example of one such ‘rite of passage’ from my first year at Morehouse involved visitation privileges on campus. As a freshman we were not allowed to have any female visitors in our dormitory until after completing our midterm examinations in October during our first semester. However, when this rule was contravened by a few ‘over-motivated’ individuals in our class less than a week into the semester, we were collectively punished and all freshman visitation privileges were suspended until after the Thanksgiving holiday in late November. Through that experience the importance of integrity and accountability was ingrained in us.

At the heart of the so called ‘Morehouse Mystique,’ which sets Morehouse apart from all other colleges and universities in the world, is the strong fraternal thread that connects its students and compels us to be each other’s keeper at all times. I can still vividly recall the moment in my first year orientation when the freshman Dean, Alvin Darden, asked us to look to our left and then to our right before challenging us to pledge to make it our duty to ensure that those seated next us would be there to graduate in four years’ time. As opposed to the usual warning given at other schools that ‘one of the students seated next to you will not be here in four years’ time.’ He also compelled us to realize that each of us had at least ten people, from family to community members whom we did not necessarily currently know, but who we would meet in the future, who were counting on us to succeed in college and in life. Therefore, if we did not graduate we would not only be letting ourselves down but also those ten people counting on us to succeed. In addition, Dean Darden urged us to never forget that a college education is a privilege and not a right, one in fact which many of our forefathers were denied as slaves. That reminder has stuck with me ever since and has provided a source of inspiration whenever I have felt overwhelmed or close to giving up on my dreams.”

In summary HBCUs embody the ascendant spirit that is captured in the words of Richard Wright who was asked by retired Union General Oliver Otis Howard while visiting Storrs College (which later became Clark Atlanta University, another prominent HBCU) what message he should take back to the North. Young Wright replied “Sir, tell them we are rising!“

What are your thoughts and feelings about HBCUs and their contemporary role in American society? For those of you who attended HBCUs, what was your experience like? How did attending an HBCU impact your life? Please feel free to share your thoughts in a comment.